Horst Makus and Kevin Graham have both published extensive lists of shape numbers and height combinations and which companies produced them.  You may also get results simply by entering a shape number and size into a Google search.  However, the lists and searches can be deceptive.  Aside from the issues of accuracy (and much of the information on the net is out of date or simply wrong), many companies re-used shape numbers.

Since Scheurich produced tremendous quantity for most of the W. German era, many glazes, many shapes, and many sizes, they were the “worst” about re-using numbers.  After all, they had the choice of going up and up in shape numbers or re-using numbers.  Companies often used particular series for particular shapes (such as something in the 800 range for non-handled vases by Ruscha for many years), it was more convenient for them to re-use numbers.  After all, companies weren’t concerned with what would help or hinder collectors decades later.

So a Scheurich 201, 275, 414 and others may appear in two, three, even four shape variations.  In some cases, the shapes are quite similar.  With two versions of shape 275, the primary difference is simply whether the top of the handle is curved (earlier version) or straight.  In other cases, the the shapes bear little resemblance to one another.  We’re taught to trust numbers, those things that supposedly never lie, but when collecting West German pottery, keep in mind that even if the numbers don’t lie, they can certainly be deceptive.  When trying to identify W. German pottery, numbers, glazes, forms, clay color, even the style of the numbers and their placement should all be considered before declaring, “I know who made this one.”  Even then, mistakes can be made.  I know.  I’ve made at least one or two….or so.

For more information and items for sale, visit http://ginforsodditiques.com,  not just the usual suspects. 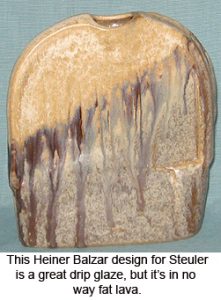